Nightwatch is proud be supported by Nicky Nicholls, a local artist who is donating the profits from the sale of some of her art to our charity.  Her own life story is extraordinary.  Read on.

Nicky lived through a dreadfully abusive childhood which left her with no confidence or self-belief and a deep seating mistrust of people and society.  In fact she was terrified of people and became isolated and a wanderer from her teens.  Addicted to alcohol, she spent the next 36 years wandering aimlessly from town to town, visiting many institutions along the way. She had no aspirations, only to be safe in her dark and dismal world. Some people tried to help her during this time but gave up when her alcoholism could not be tamed.

Finally, in the early 1980’s, Nicky got the help she so desperately needed.  Arriving at a detox unit in the back of a Police van, she gradually she began to understand her alcoholism through Alcoholics Anonymous  and became determined to stop drinking.  It was not easy and it was only when she was allocated a homeless refuge and attended AA meetings regularly with a Sponsor that she finally stopped and has been sober since.  After intensive psychotherapy to help her deal with her traumatic and troubled life she was moved to sheltered accommodation and for the first time in her life was safe and clean.

During art therapy sessions in hospital she discovered an ability to draw and paint.  She was shocked that people also liked what she produced!  Nicky has sold her paintings worldwide and has won Koestler Awards for both her art and music. She mostly paints with her fingers and has a particular interest in native American subjects which adorn the walls of her flat.  Her art also hangs in Hever Castle and Southwark Cathedral.   All profits she makes are donated to charity including Great Ormond Street children’s hospital and Croydon Nightwatch.

Nicky writes: …”I am so lucky and realise that we should never give into alcoholism or other mind-altering substances, or abuse. Life is a precious gift and I was determined to live my dream. With the support of my carers and the unconditional love of my lovely friends, I look forward to each new day with hope. It is never easy, but I remind myself how far I have come. Thank you to all of you in my life, it is a pure joy to help others and to give back”…

Nicky has been chosen to represent Croydon in the Nationwide BID exhibition in August.  Her art will be on show in the Croydon Visitor’s Centre,  1-3 Station Approach, Croydon from 4th August 2014 for 1 month.

Early next year, Nicky will also be exhibiting her art in Southwark Cathedral. Dates to be confirmed – watch this space! 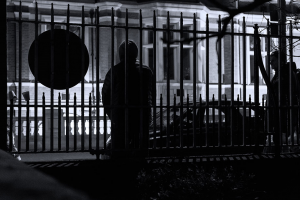 Nightwatch has known Wayne through years of addiction and drinking – and through his struggles to get free from them.  Now at 37, he has been clean of drugs and drink for nine months, and was prepared to speak about his experiences.

He used to work in the City for a well-known company which had a casual attitude to drug use, ‘Lots of people were on coke and drinking champagne,’ he said, ‘it was encouraged – when we got new business, gained new clients, we would all be taken out to a wine bar and everything would be paid for.  I had loads of money, I bought everything I wanted.

‘The thing that really kicked it off was when I lost my companion, my dog died, he’d been with me for 14 years, from birth, it really affected me.  I was doing more drugs, I met up with the wrong crowd, I started bringing them back to my house.  But I was still working, then I got made redundant in 2003.  I was still doing jobs, I could get work, but I’d do it for a while then not go in, I was messed up.  So I didn’t have any money but I still had to keep up my habit, I sold everything I had.  My place became a crack house, I was really into drug culture.  It got to the stage where I thought: I’ve got to move or my door was going to get smashed in in a raid, you know.

‘I moved to Croydon to get away from that life and went to a drug agency who helped me, but it was hard.  I stopped doing drugs but started drinking more and more, it‘s called a cross addiction.  I found out about Nightwatch from someone at a drug agency, one of my friends said you can get food parcels and clothes and bedding.  I started going every night to get food.

‘My life was just drink, drink, drink.  I had to leave the place where I was living because my notice was up.  The council said they would help me but I had to wait for a bailiff’s letter.  When I got that I went back to the council and they said they couldn’t help me because I was a single person.  The bailiffs came and I was kicked out.  I stayed at my friend’s house, my uncle’s house, stayed here, there and everywhere, trying to stay off drugs.

‘When I didn’t have any food I’d go down to Nightwatch to get something to eat and food parcels, and I’d get clothes when my things were worn out.  When I got somewhere to live, Nightwatch provided me with a fridge, washing machine, a telly, so I felt I’d got a place of my own again.

‘I hooked up with WDP (Westminster Drugs Project) who helped me with the addictions.   I went to Bethlem Royal for a detox for two weeks but I relapsed.  Then WDP set me to Weston-super-Mere for three months.  I’ve stayed clean since then.  Drink is everywhere since I’ve been back but I’m taking the right steps to maintain abstinence, I’m going to the gym, I’m going on training courses: I’ve passed proficiency in Excel and Word and I want to do a  web design course.

‘I live in supported housing, Nightwatch has given me things to make this place more comfortable, enough to build a foundation.  At the moment I‘m satisfied, but I’m hoping to be rehoused in a year, and Nightwatch will help me furnish my new place.  They have been there for me.’