Who do we help? 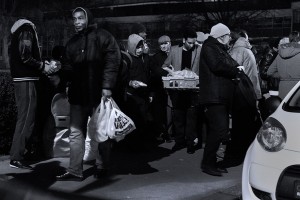 Over more than 40 years of work Nightwatch has empowered and assisted thousands of homeless vulnerable people to turn around their lives, from being homeless and unemployed, to re-settling and providing them with a stable, enriched life. For others, we have supplied a constant, caring presence in lives which are too often fragmented and uncertain.

Our clients are typically adult males. They frequently have an institutional background in such places as children’s homes, hospitals, penal institutions, and the armed services. A sizeable minority suffers from drug and alcohol problems but the majority are caught in a poverty trap of benefits and institutional life.

There are more black British people than in the general population in Croydon.  People with the more concealed disabilities such as deafness, poor sight and epilepsy are over-represented. Women traditionally represented 10% of the total but in recent years the percentage of female homeless people has increased to 14-16%.

We now see far fewer asylum seekers than we did a few years ago. There was an influx of Eastern Europeans who came looking for work in the five or so years after 2010.  These numbers have settled down now with few new arrivals; the departure of some for their home countries or other EU countries; and others settling down to life in the UK and no longer needing our help.

Over the past few years we have seen more people who have work and somewhere to live, but who cannot afford food after paying for rent and energy.  These problems of high rents, and fuel costs and low wages are serious and worsening.

Click here to learn about formerly homeless artist Nicky, and about Wayne, who has benefitted from Nightwatch’s work.